Yoga for the Stages of Menopause 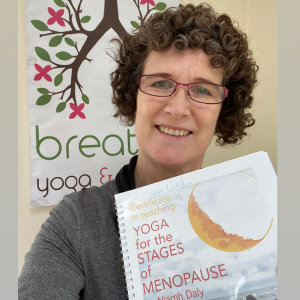 Yoga for the stages of Menopause

The good news is: During post menopause, many of the symptoms you experienced during perimenopause and menopause may cease or at least ease. However, there are other health issues to consider which may be caused by your body’s decrease in hormones. Pre-menopause is the stage just before the perimenopause and is usually associated with a surge in energy levels. Join me online at Breathe yoga & Pilates to learn more with Yoga for the Stages of Menopause (4 week course) supporting you on your menopause journey. Book here.

In 2018 many of my perimenopause symptoms were abruptly exaggerated with 6 months of invasive chemotherapy necessitated to treat a stage 3 cancer, Non-Hodgkin’s lymphoma. Within days of the start of chemotherapy treatment my hot flushes, night sweats, anxiety, emotional turmoil, and sleepless nights were dramatically worse. While so much was going on it was impossible to determine what was due to menopause and what was a reaction to the chemotherapy.

Within a few months of finishing treatment (at this stage I was post menopause) some of the physical symptoms eased such as night sweats (less severe) and I was sleeping better. The emotional turmoil was ongoing which at the time I attributed to Post Traumatic Stress of sorts in reaction to the shock of the diagnosis and treatment. Overwhelming hot flushes (followed by chills) and bursting into tears at the drop of a hat was the normal course of events. I did not have the energy to participate in the yoga trainings and workshops I had earmarked earlier in the year when undergoing treatment. However, I attended some lovely restorative yoga classes and some supportive friends joined me, the teachers were lovely, and it was just the calming, nurturing environment I needed to allow body, mind and soul recover and heal in its own time.

In February 2021, my successful participation in the Teacher Training Yoga for the Stages of Menopause (by the wonderful teacher and mentor Niamh Daly of Yinstinct Yoga) has been both an eye opener and an inspiration to me. As it turns, out restorative yoga is an important element of yoga for the stages of menopause. If I had known 10 years ago, when in the throes of peri-menopause what I know now, I could have saved myself a lot of grief and anxiety. When in my 40’s I was not aware that many of the health concerns I had then were actually perimenopause symptoms.  However, I now feel empowered to share this knowledge with you through Yoga for the Stages of Menopause.